Make the most of your Barcelona visit by taking a day trip to the mountains. Enjoy skiing in the Pyrenees ski resorts La Masella and La Molina. 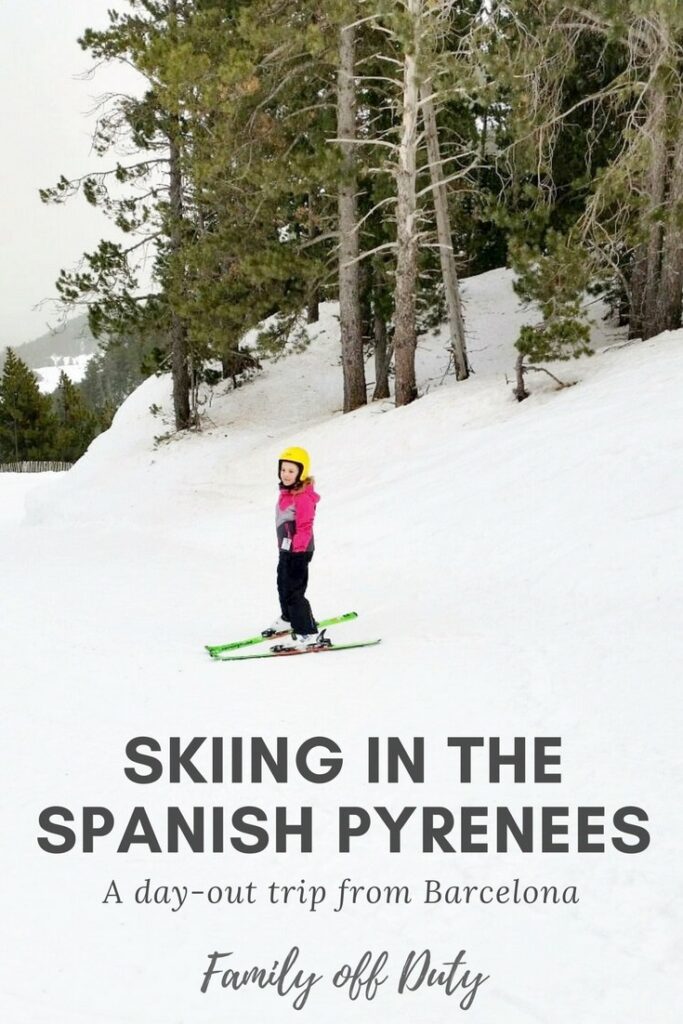 When you think of Barcelona skiing is not the first thing that comes to your mind. You may even think: does it snow in Barcelona?

Well, not very often. But make no mistake thinking that there isn’t ski resorts near Barcelona. Plenty to do on a Family Adventure trip!

That is why I want to write about our experience going on a Pyrenees day trip from Barcelona:

Whilst we were in the Catalan capital during a school holiday week, we were kindly offered the chance to go skiing for a day in the Pyrenees with our partner Visit Barcelona. It is really easy to get to the Pyrenees, Barcelona is only a two hour drive away.

So if you are looking for one day trip from Barcelona, I would definitely suggest you to visit the Pyrenees. In the winter you can go to La Molina or Masella ski resort, which together are called Alp 2500, the largest skiable domain in Spain.

But it gets even better:

There are daily bus trips to this ski resort near Barcelona (you can also get from Barcelona to Pyrenees by train however you will have to change trains and it takes longer).

So it is much better to take the bus and you can book the skibus day-out online at Visit Barcelona website, where all the information is transparent. The organisation was fantastic providing such easy day trips from Barcelona. We want to tell you more about it below.

**Please note, this service is only available in the skiing season. 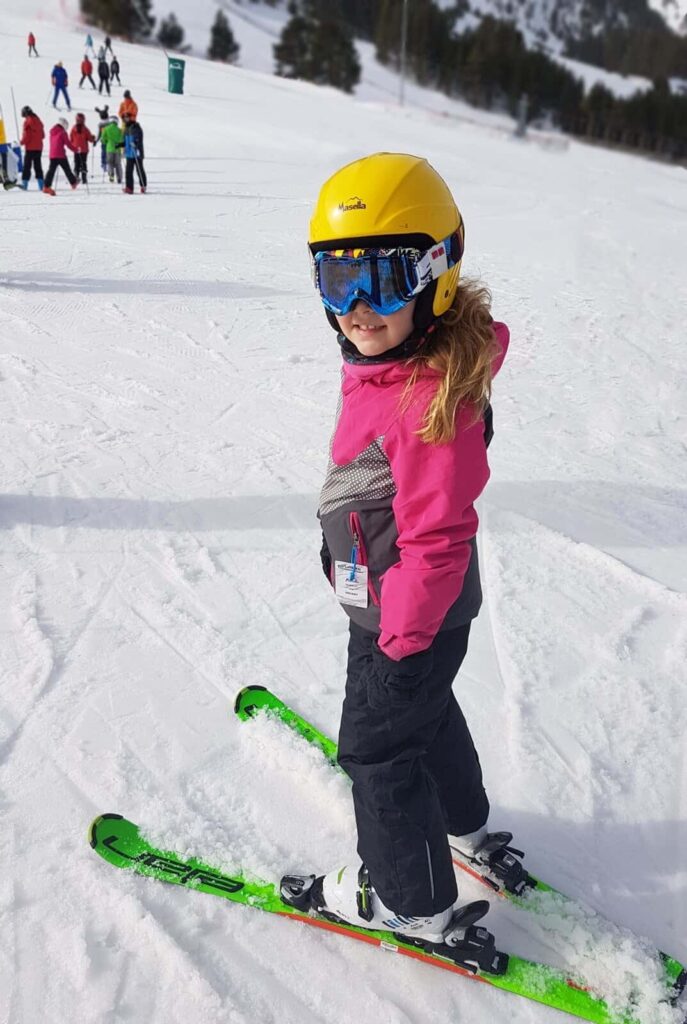 Masella and La Molina together form the largest ski area in the Catalan Pyrenees, called Alp 2500.

These ski resorts near Barcelona airport offer hundreds of kilometers of ski runs. Each resort is not so large but have all the facilities (modern ski lifts, snow cannons, ski schools, restaurants, accommodation on the slopes, parking lot, medical assistance station and rental and repair services) and together they make a great ski domain.

Alp 2500 is the nearest resort to Barcelona along with Port del Comte and also Andorra. In fact you have more time you could head to a Andorra too and enjoy many other places for skiing in Pyrenees. This would be a great weekend getaways from Barcelona.

The Pyrenees ski season starts at the end of December going all the way through March/April. There seemed to be a fair amount of snow cannons around but the snow there was mostly natural when we were there. The temperature had just gone above zero that day but we got to enjoy good snow throughout the day before it became a little bit slushy in the afternoon at the lowest point of the skiing area. However we had a great time.

At Masella you can also go night skiing after the sunset because there are 13 floodlit slopes, making it the largest floodlit ski area in the Pyrenees.

This ski resort has accessible infrastructure for people with reduced mobility making La Molina one of the best Pyrenees ski resorts and the world leader in winter sports for people and athletes with disabilities.

Day trips from Barcelona to La Masella and La Molina ski resort are offered daily with the Sagalés Skibus. The bus has a few locations for pick ups, we left from the original location at Plaça Catalunya in Barcelona. It was an early start – leaving at 06.45 and returning to Barcelona at about 18.00, depending a little bit on the traffic, but so worth it!

It is a great way of getting there – you can relax on the way there and the way back, which is needed after a hard day’s skiing Pyrenees. We slept for most part but if you are awake you have the chance to see the stunning landscape changes from sea level to the lower mountains of the Pyrenees area and then the higher mountains.

The price includes the bus round trip, ski pass for the area, skiing insurance, skiing gear (skis, sticks and helmet) as well as guide assistance on board the bus. This is great value for money!! As we were not fully prepared for a day of skiing we also had some ski clothes provided when we arrived which was great.

We arrived at about 09.15 after an uneventful (not much traffic) and relaxed trip for skiing near Barcelona. It was time to get our gear sorted at equipment hire shop (included in the price). We were suitably kitted out and there was a short climb up a road where we then started our skiing. 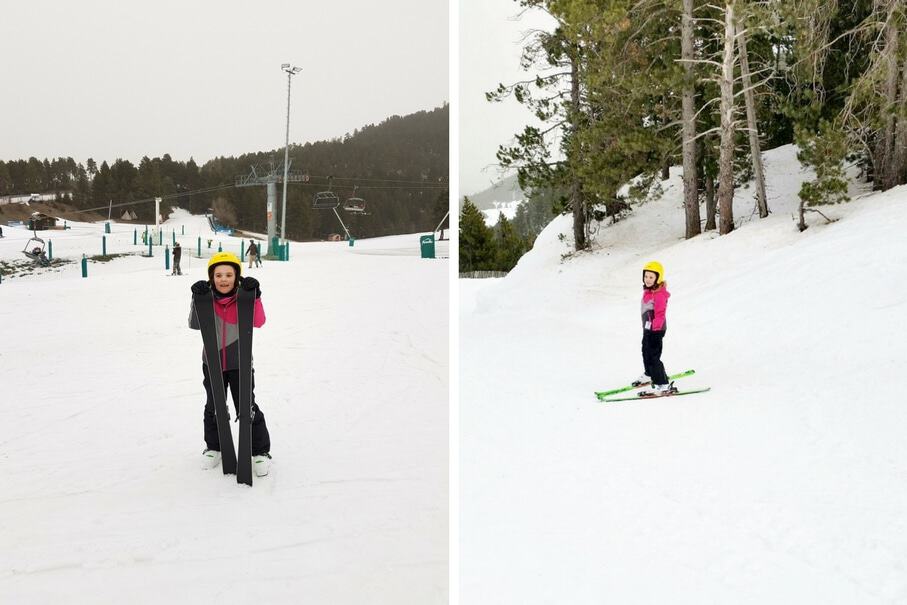 Day trips near Barcelona – Have fun in the Pyrenees ski resorts

Skiing in the Pyreness

We started on the TSD TGV chair lift on the blue runs. That gave our daughter the chance to get the feel for skiing again. After a bit of drama on the first run, she got her confident skiing skills back. We then stopped for brunch at the restaurant at the bottom. We had some great ham sandwiches there (absolutely delicious!) and a coke for good value. After this we did a few more runs from this same lift (there are a number of blue runs which run down both sides of the lift). La Plana and Familiar are relatively easy runs for beginners.

At one point Vix and I (Dad) went right to the top of the mountain (La Tosa – 2,537m). From here we skied again to the bottom via the blue runs La Carena, Dues Estacions and La Corda.

The great thing about the resort is that it has everything from very easy green runs at the bottom to some more challenging looking red and black runs (which we did not attempt on this visit). Many of the runs take you through and between the trees. After we arrived there was a large influx of school aged children. Despite this further up the slopes there was plenty of space and not the feeling we were being crowded. The queues at the lifts were fairly minimal too.

Our ski pass covered us also for La Molina but we did not attempt to ski over there due to the limited amount of time we had (and the speed at which we were skiing). We didn’t want to be late for the bus! However we would definitely visit at another time, now that we know the resort a bit better. 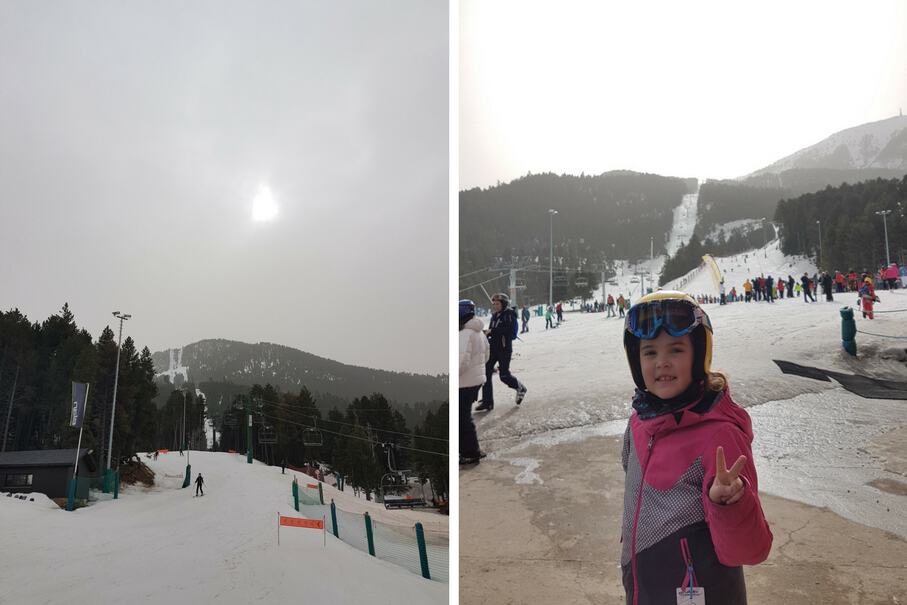 We left the resort at 16.00 on the dot and woke up back in Barcelona.

All in all a trouble free experience and great idea for an away day or a weekend. It must also be great for the people living in Barcelona. They have effectively these mountains almost on their doorstep. The ease with which this could be accomplished for us made it a must do for anyone visiting Barcelona in the right season (but also for people living there!). The bus has got to beat taking the car.

The skiing did not disappoint at all. Despite the temperature, the snow was very skiable and just slowed down a bit by the end of the afternoon. We had a great day out and would recommend it to everyone. This is definitely one of the best day trips from Barcelona.

Do not to forget to bring ID with you to validate any insurance policies. Also authorization for any kids that you may be accompanying (if they are not your own).

You can book this day-out trip via Visit Barcelona website during the skiing season. Search on the tickets navigation menu.

Check out our video: